It was a sunny day in the Sunny South East with temperatures in the early 20’s, the highest recorded since the 70’s, blue skies and a refreshing breeze coming directly off the lake at Ladies Island in County Wexford, Ireland. A perfect day for harvesting this crop of oats. One of the men explained “the seed was ready bur the straw towards the bottom of the stem was a little wet due to the prolonged spell of high heat this summer” 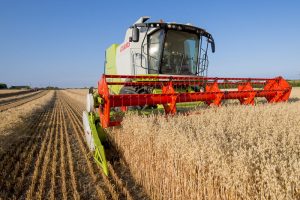 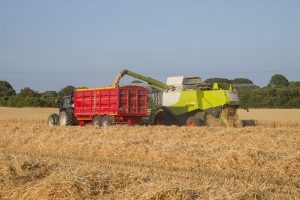 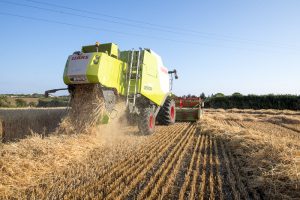 At first glance I thought there was going to be a challenge as there was a modern “Claas” Combine Harvester and a vintage “Reaper / Binder” in the one field. Seemed a fairly unreasonable challenge, but it was an thought-provoking sight.

The modern “Claas Lexion 630”Combine Harvester”, costing around €200,000, and with its 20 foot cutting blade, is capable of harvesting 6 to 9 acres of corn an hour, removing the valuable seed and despatching the husk and straw behind it to be later collected by the bailer for storage, all with one operator.

Further into this massive field of Oats, was a vintage “Reaper / Binder”, manufactured by Harrison, McGregor and Co Ltd Albion Engineering Works in Leigh near Wigan, UK, in the late 40’s. The cost of this machine I couldn’t find. At that time, a very necessary implement for cereal crop harvesting and a state of the art technology. This was certainly a nostalgic moment, a snapshot of an era in farming well gone by. 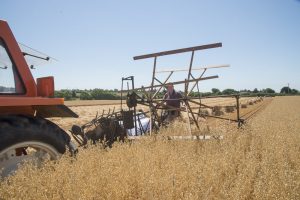 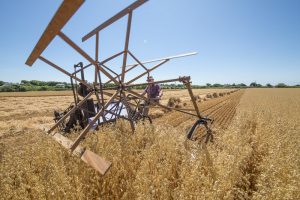 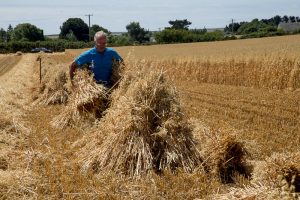 This “Albion Reaper / Binder” with its 4 foot wide cutting blade had the capability of cutting +/- 1 acre of corn in an hour. Manned by the driver of the tractor pulling the Binder behind, an operator on the Binder itself, sitting on his steel seat with only a bed of straw for insulation between the steel seat and his backside, managing the technicalities and operation of the contraption.

As the corn was cut with its 4 foot cutting blades, it fell onto a rolling canvas sheeting that transported the cut corn into the binding section where the corn was automatically tied into tightly bound “sheaves” to be discharged from the side of the machine directly into the field. A couple of helpers then collected these discharged sheaves, “stooking” them into small upright bundles of four or five ready for further drying in the field. After a few days, the “sheaves” were then arranged into a larger “stack” for collection to remove from the field at a later date and brought to the farm yard for storage into a “rick”. A thrashing machine was then brought to the farm yard to “thrash” the corn to remove the valuable seeds leaving the straw behind. The “straw” was then re ricked for storage and later used for bedding the animals as needed.

The smell of the cut corn, slightly musty in aroma, but very relative to the land and this time of harvest and the patterns formed by the remaining stubble provided a graphically visible creative work that blended into the theme of “Harvest”.  What seemed to be visibly missing were the birds. This is a huge feeding opportunity for insect eating birds as the cutting disturbs the insects and opens up their cover. Maybe there is something missing out of this assumption.

My memories way back were on occasions like this, the tea and scones were brought out to the field for the “break”. The Craic was mighty, storytelling, truths uncovered and the problems on our country solved. 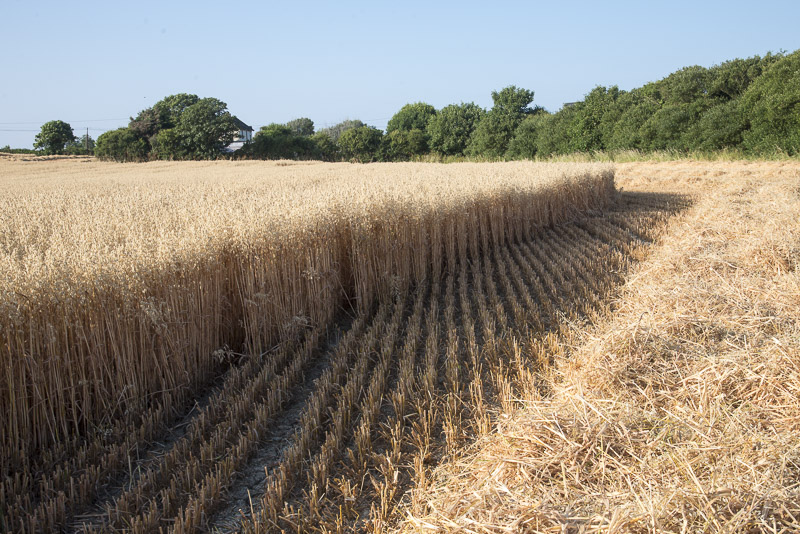 I guess this wasn’t a challenge after all.

Yes the Combine Harvester was doing its commercial work with efficiency and precision. The Binder, well this was an exercise by some old machine enthusiasts who were gathering corn in this long departed way to demonstrate “thrashing” at an upcoming Rally of vintage machines in Tagoat, County Wexford on 18th August. (The Tagoat Steam Rally)
By John Ironside|2019-06-27T12:50:19+01:00July 19th, 2018|Farming, Food, Historical|0 Comments