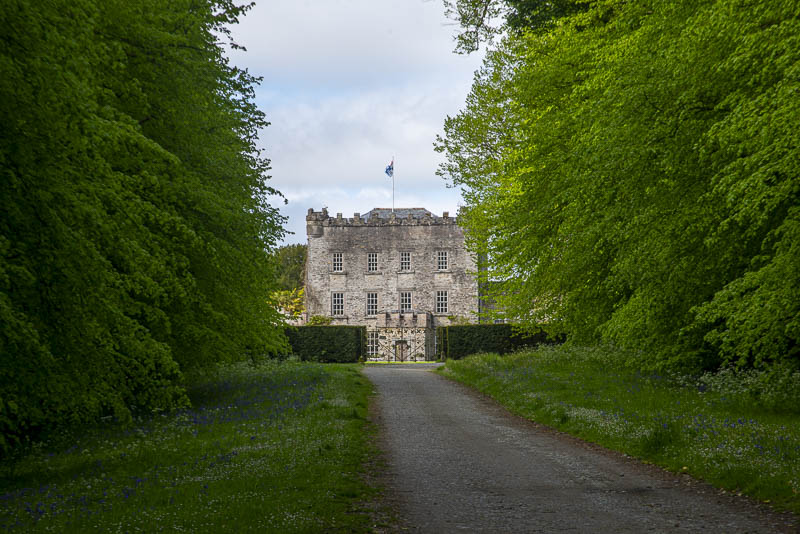 Huntington Castle is the ancient seat of the Esmonde family. The Esmonde’s moved over to Ireland in 1192 and were involved in other castles such as Duncannon Fort and Johnstown Castle in County Wexford, before building Huntington and settling down in Clonegal. The family name has changed twice due to inheritance down the female line and the present family name is Durdin Robertson, who are direct descendants of the Esmondes. Alexander Robertson and his wife Clare now live in the castle with their three children, Herbert, Esmonde and Freddie.

The entrance to the castle is from within the heart of the quaint village of Clonegal via a long impressive avenue, built in the 1680s, lined with mature Lime Trees. The focal point at the end of the avenue is the Huntington Castle itself. When I visited in late May, the avenue was covered in bluebells, a beautiful, peaceful sight.

The grounds and this Parterre garden was designed by John Murphy in 1880 with many plants sourced from Kew Gardens in London. The layout is Geometric French Style based on symmetry, playing on interplay between formal and informal garden elements while putting order on nature. This type of garden was fashionable in the 17th century.

These elements of the wilderness woodland garden is divided by a hard core covered pathway to the east, leading to the edge of the River Derry.  There are further paths circumnavigating each area of these wild spaces from where you can explore with ease the absolute beauty of mature woodland and enjoy nature and wildlife and all that it brings with it. There are water ponds providing refuge for aquatic nature and drink for birds and mammals that flourish here. 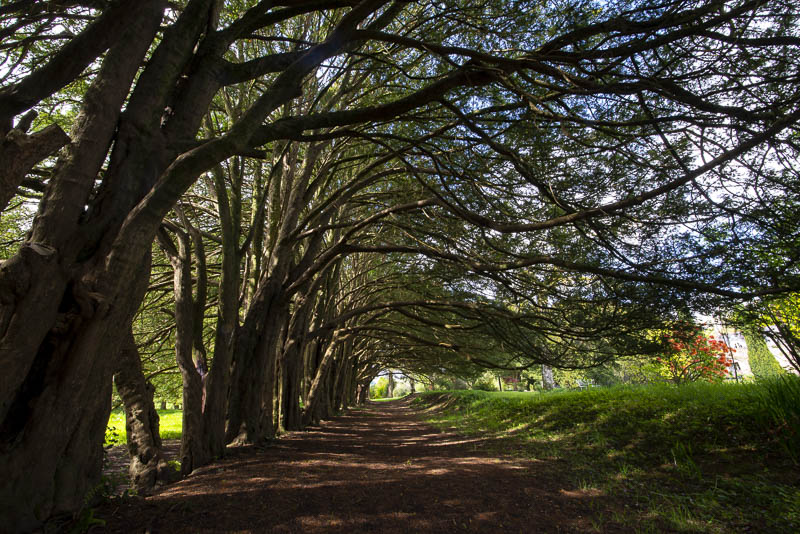 Immediately to the eastern side of the castle is the formal garden with Yew, manicured lawns and a fountain. There is a strategically placed seat under the bows of a weeping ash tree from where you may allow your imagination to wonder and reminisce a little.

From here, you join the main path that that travels down the center of the garden. Immediately to the east (your left) of this pathway there is the Yew Tree Walk, which may be accessed from the formal garden directly, thought to have been laid over 500 years ago, provides a naturally covered walkway under the overhanging Yew Tree branches. A cool haven!

I then wondered into the “Wilderness Woodland Garden” area developed in the 17th Century. The floor was covered in blankets od Bluebells, the undergrowth easily accessible and wondered among magnificent Heritage trees. A cluster of 150 year old Red Cedar and Japanese Cedars in the Druids Grove, towering 50 or 60 feet I’m guessing. Then the 17th Century stew Ponds, water fed directly from the river Derry, and more woodland. Stew Ponds were a medieval name for a fish pond used to store fish alive ready to be caught when needed. At the end of the path is the Lake, and beyond the lake is the River Derry.

I followed the path around the lake. A perfect habitat for the water hens and coots. I can only imagine in the summer months, the insects and the hovering dragonflies. Toward the end of the lake was a small hut, now in ruin with some machinery in in it. When I enquired about it, it turns out this was the electricity generator for the castle, a water turbine installed in 1888., and driven from water from the river. Near the Turbine Hut, in an area called “The Inch”, is a Giant Fir, Yew, champion Cypress and Hemlock trees. 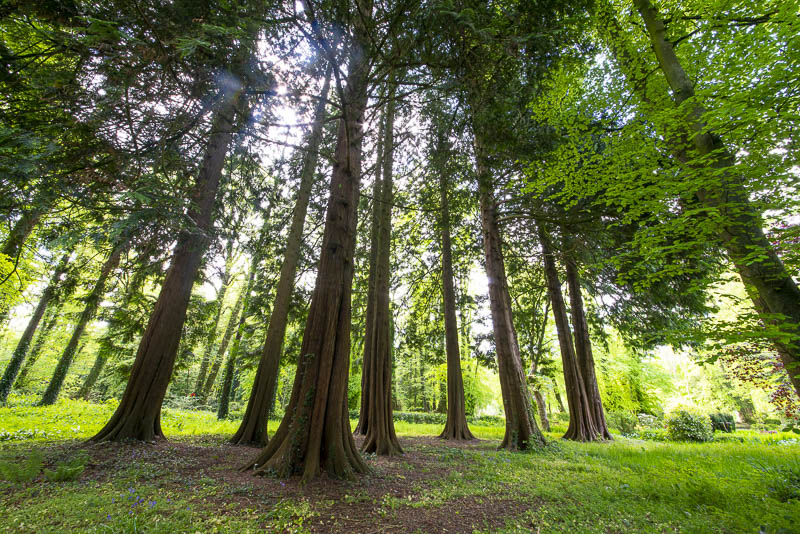 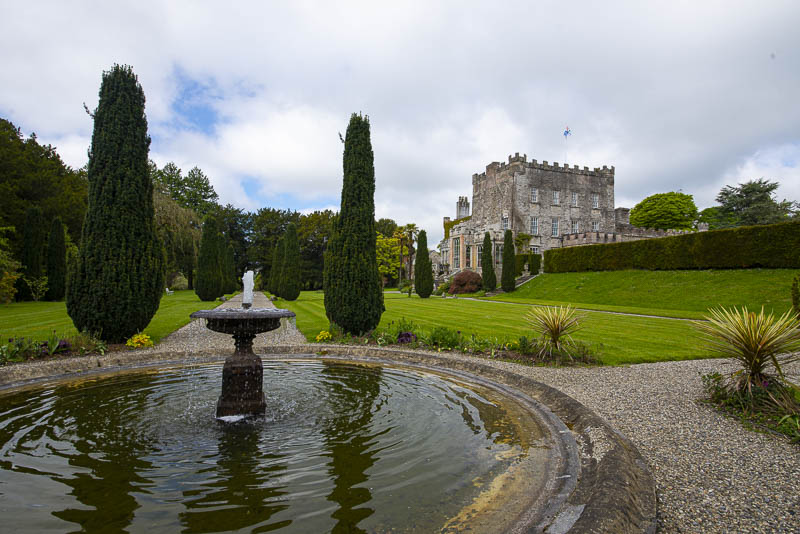 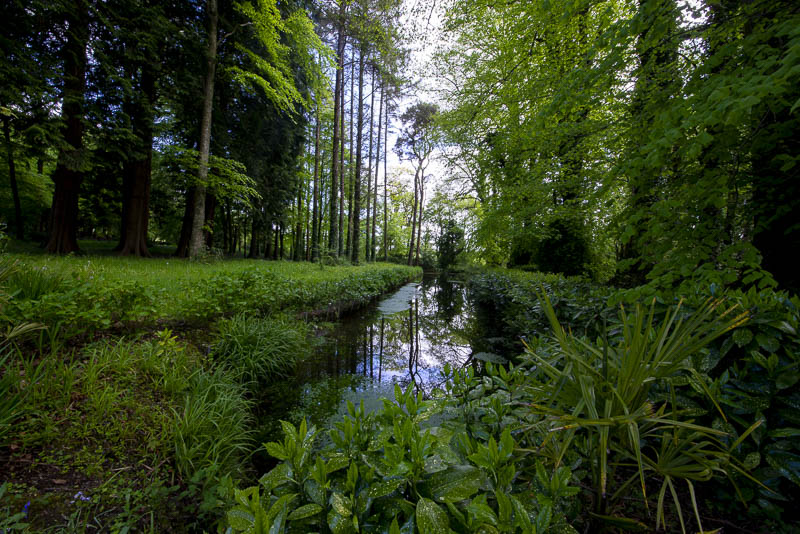 On the walk back towards the castle, the bluebells were in abundance. Strong sunlight breaking through the tree tops adding luminosity to their blue hue. Further up, nearing the Orchard is an Irish Champion Siberian Crab Apple tree. The path winds its way to the Rose Garden, but these were only in bud at the time of my visit. There was remains of brick and stone constructed wall which I think would be used to grow fruit on such as pears on. The clay brickwork caught my eye.

To one side of the orchard were the glass houses. The glass houses were unusual in that they were made of concrete. Alexandra’s Great Grandfather, Manning Durgan Robinson, was an architect and was pioneering “pre cast cement structures” in Ireland at the time and built these in 1933.

From here, say hello to the peacocks and the free roaming Bantam chickens, and enter the impressive court yard. The facade of the current castle and home clearly defines the evolution of the building, which was built in the 15th Century as a Garrison, as areas of dwelling were added on to the original structure. A sort of mix mash of architecture, but quite beautiful details. Within the court yard is the artist studio and overhanging these are magnificent examples mature Oak.

The coffee shop is here also. Good coffee, cake and pastries, snacks and soft drinks. Also a souvenir shop. The outside tables, surrounded by history itself, are a relaxing atmosphere where you can meet other garden lovers and chat about this garden experience. 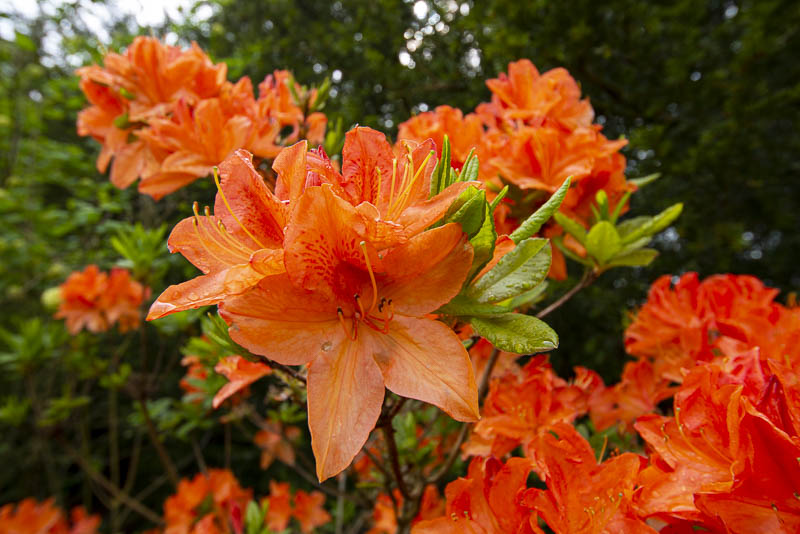 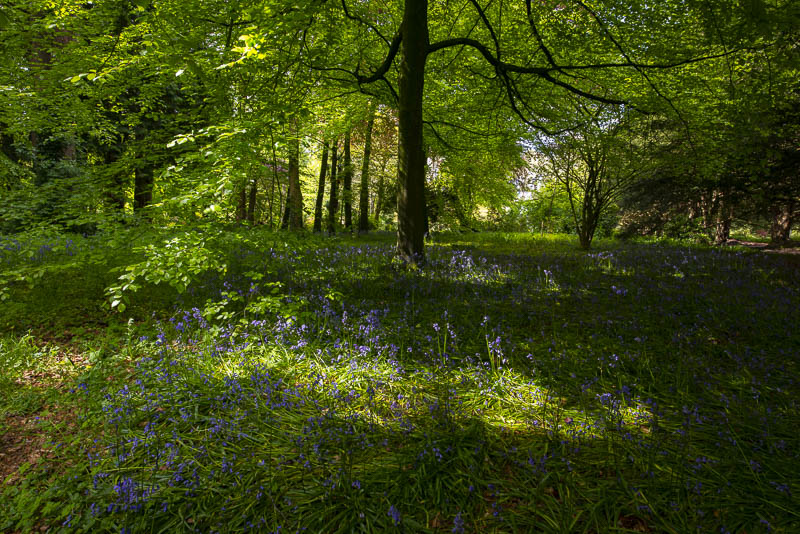 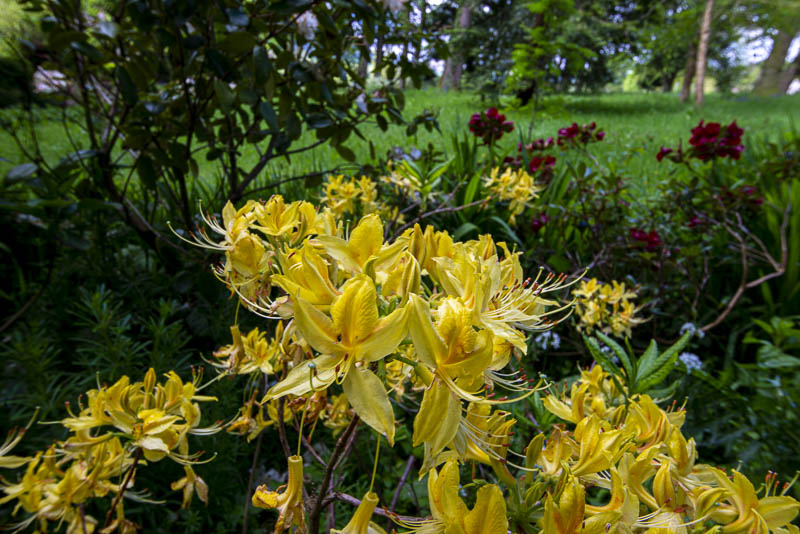 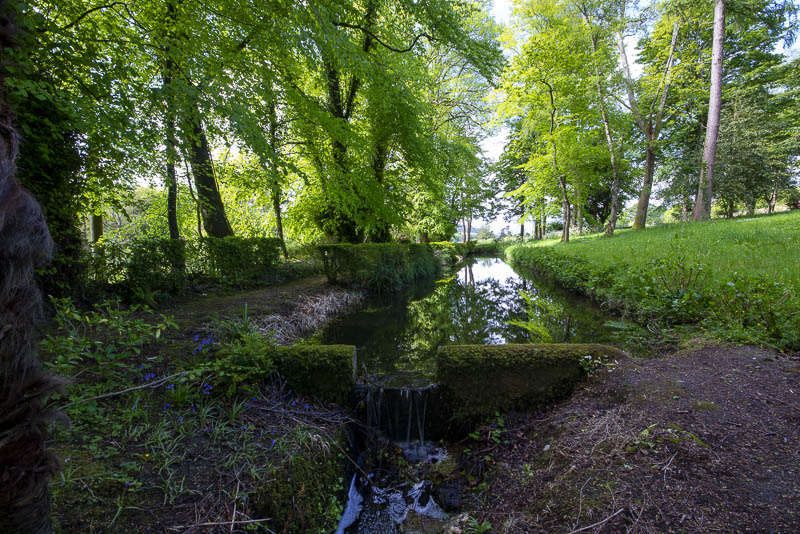 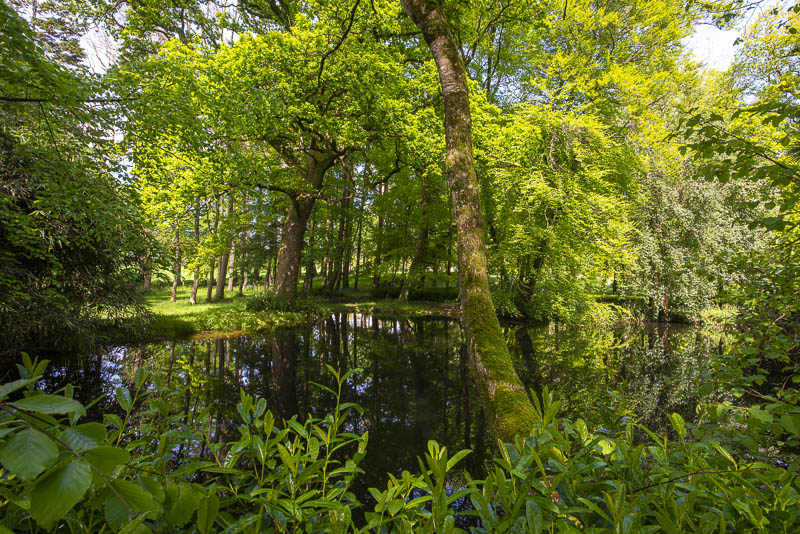 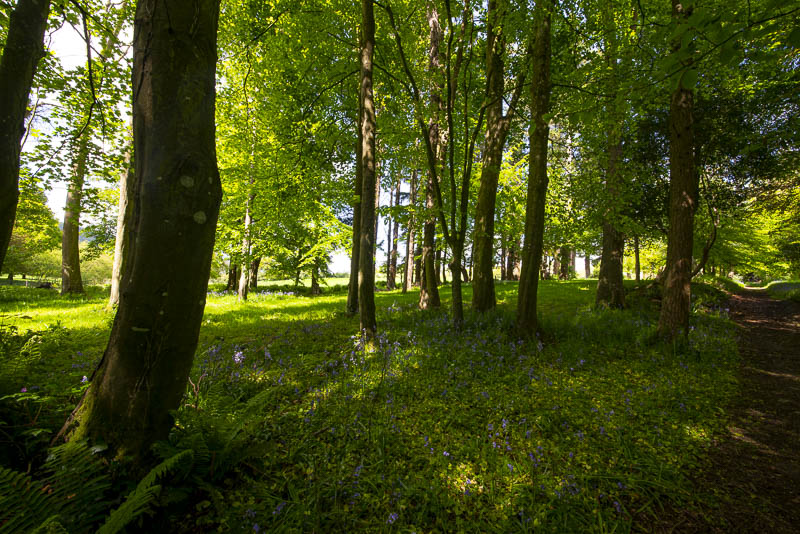 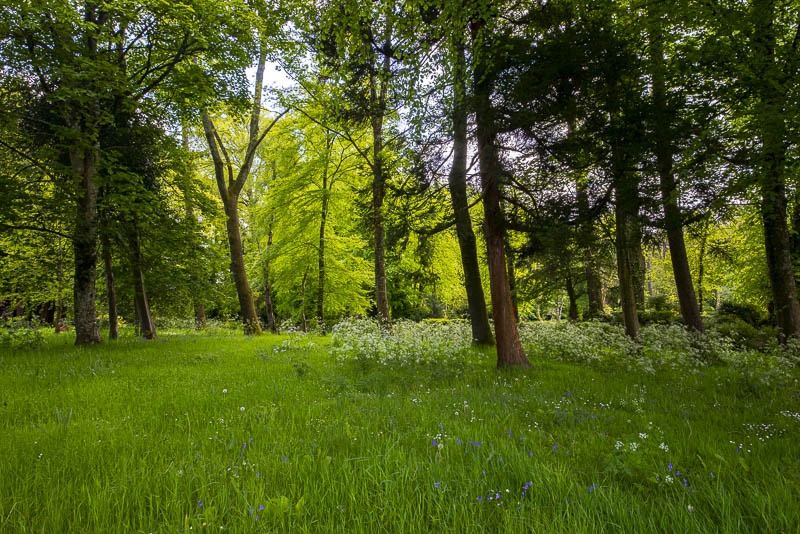 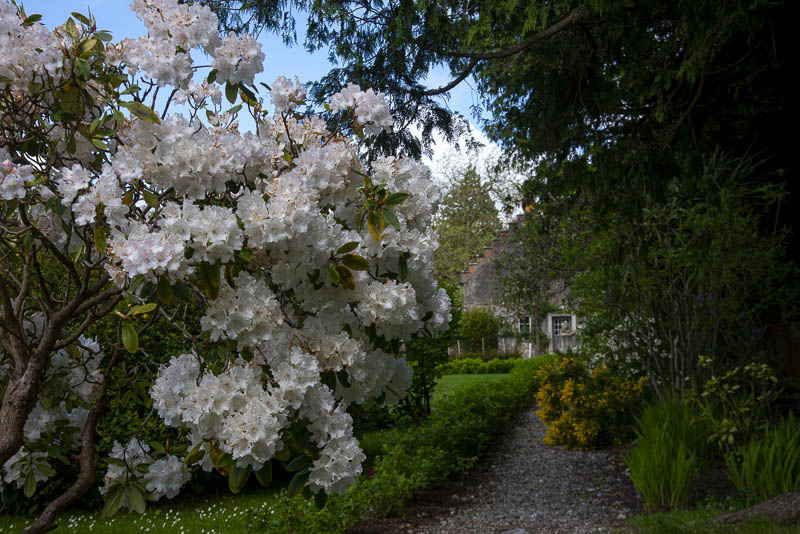 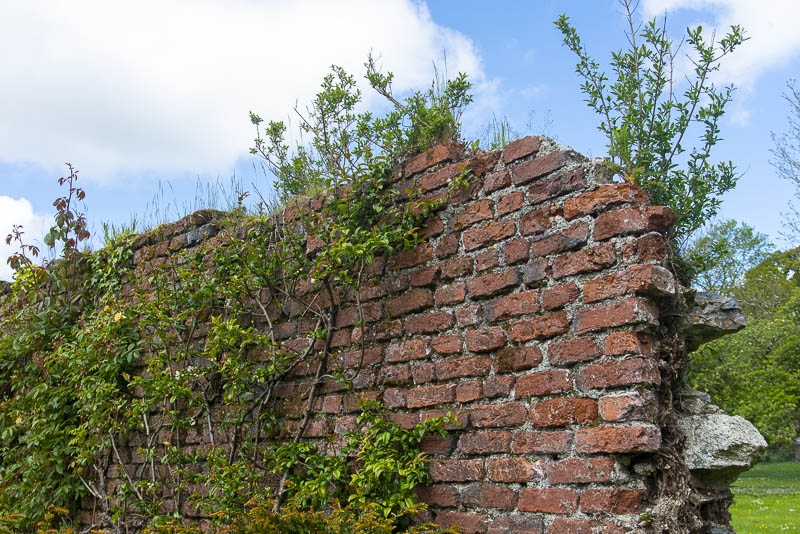 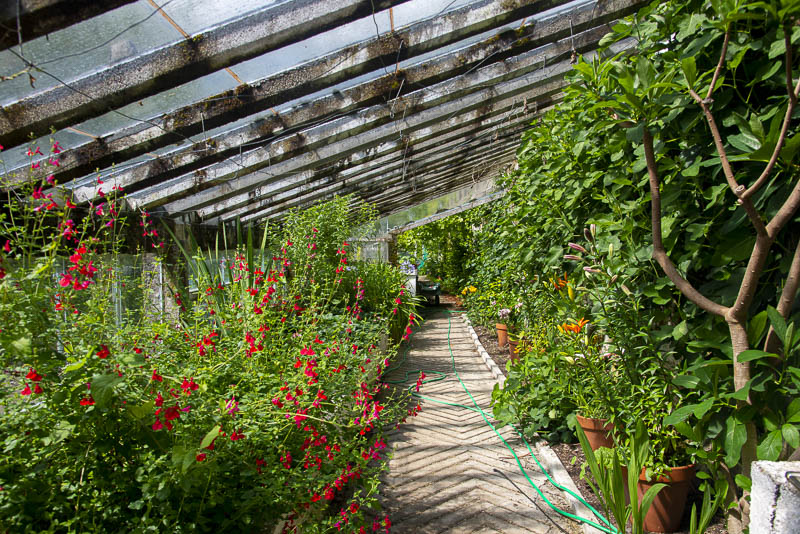 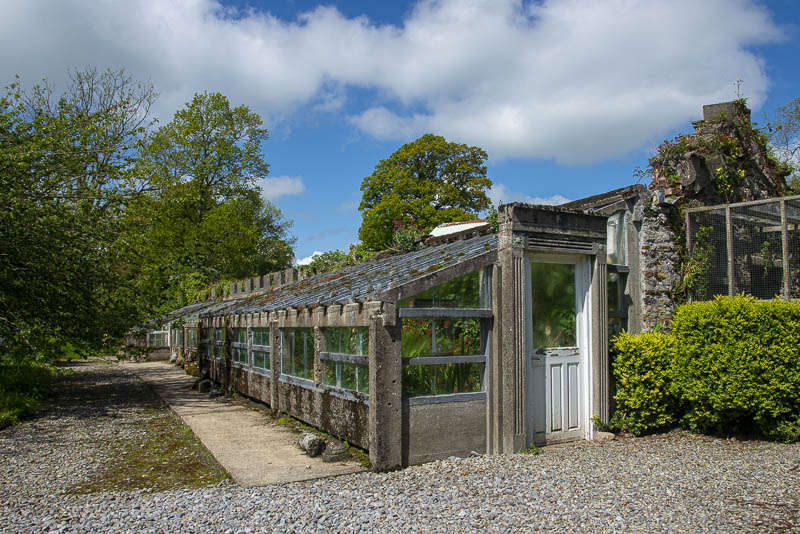 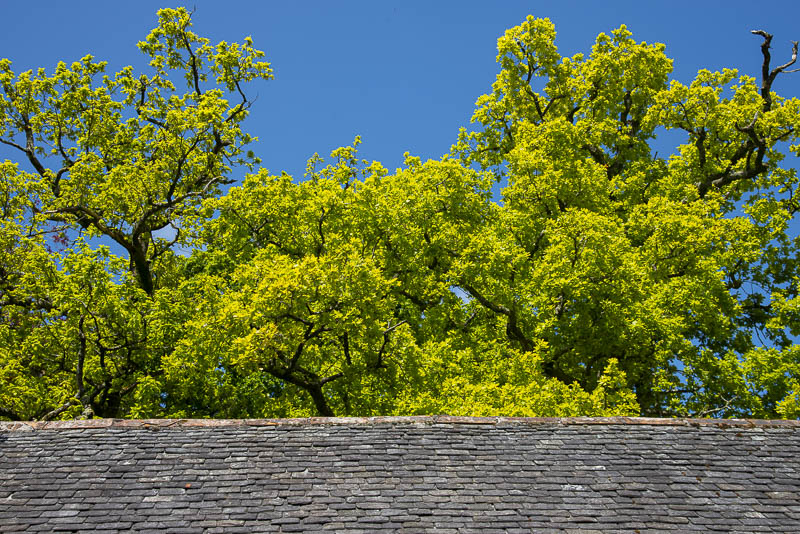 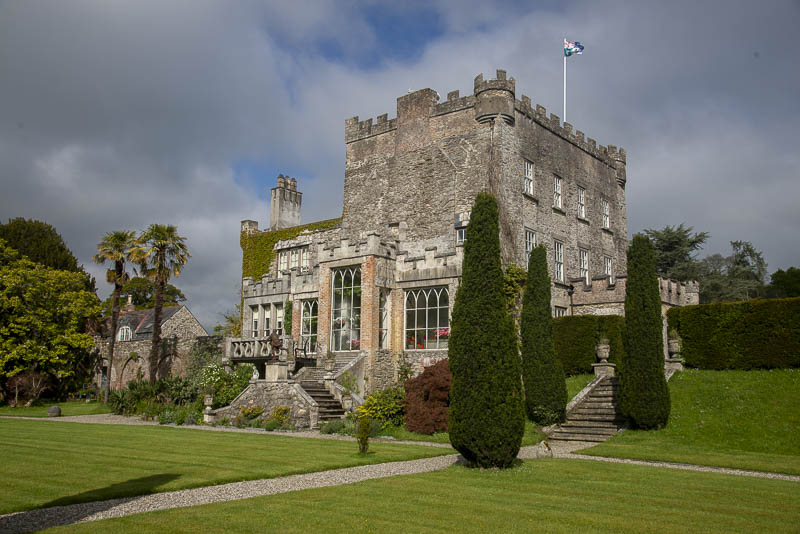 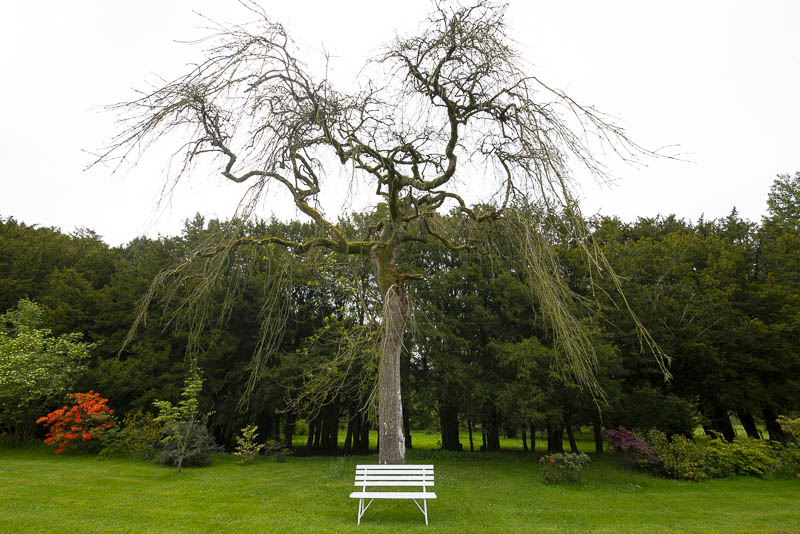