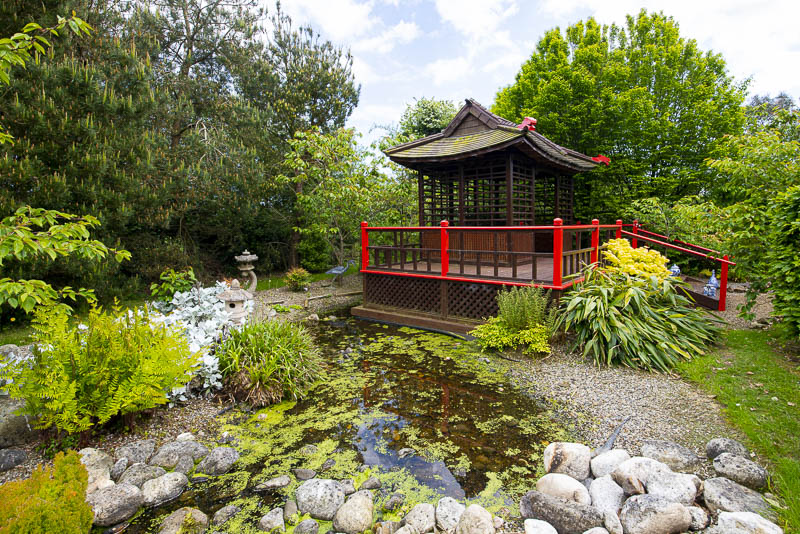 Iris Checkett, after completing a gardening course, began work on the designing of her “dream garden”. In 2001, at the age of 65 and retired from nursing, she drew up plans, got some help in for the groundwork and so the project began. The construction of this impressive garden did not come without its glitches. It soon became apparent that an unforeseen challenge was hidden beneath the green grass. A few inches below the top soil was a layer of Clay Macemore soil delivered partly along the Wexford coast line during the ice age. This created a need for special drainage techniques, but the problem was overcome.

Glenavon Japanese Garden is one acre in size and built as a labour of love by Iris, who built this garden for her husband Reginald, who was ill at the time, so he could look out over it from his upstairs window while he worked or sit in the center of the garden and absorb the healing powers from a garden such as this and get inspiration and peace from its energy. Sadly, Reginald never saw the completed project. Located about four Kilometres from Gorey town on the R742, it’s easy to find and accessible to all finesses and abilities. 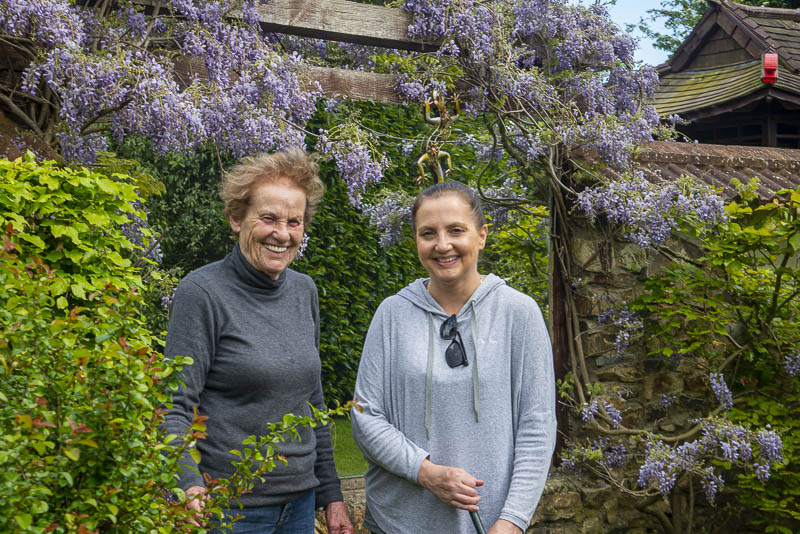 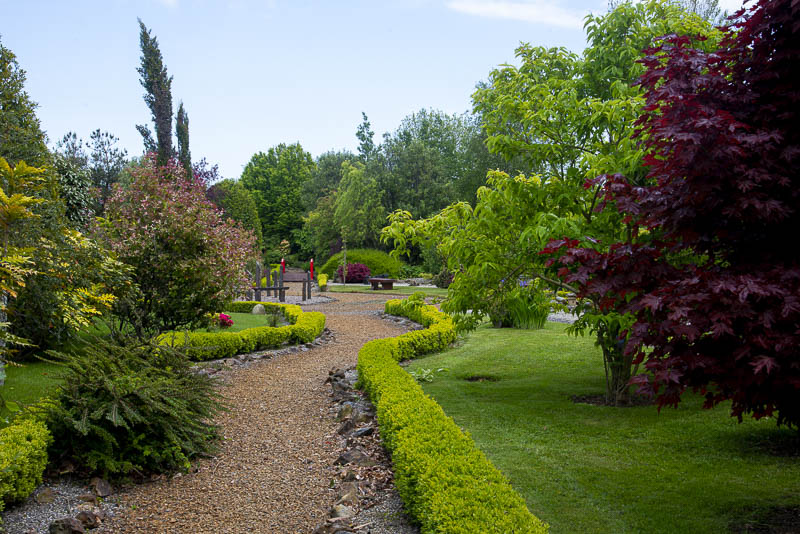 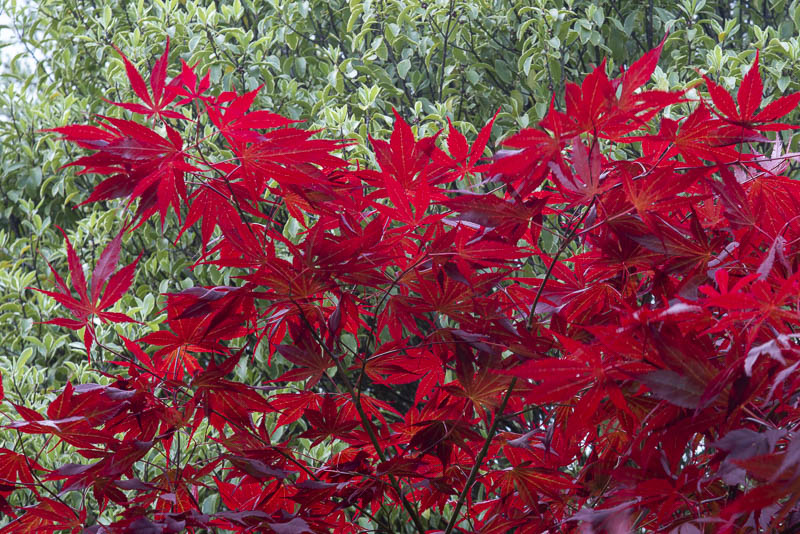 The garden is inspired by the four natural elements; wind, water, earth and fire and divided into four areas that represent the seasons; spring, summer, autumn and winter.

As you enter the garden through an ornate arbor, you are immediately confronted with a spectacle of surprise, a vista of ponds, water fountain, graveled paths, their symmetry broken by the small red bridges over the stream, that eventually leads you to the Japanese Tea House at the far extreme of the garden. The mature trees, shrubs and seasonal flora, the lack of noise and the sounds of the wind in the leaves makes this peaceful and tranquil garden a place where you want to sit a while, reflect on yourself, perhaps even your life, and come to terms with things that may be worrying you. There are no straight paths as it is determined that it stops the bad spirits. This is the function of this wonderful garden. The garden is naturally divided into the four seasons: spring, summer, autumn and winter, and all the elements are there: wind, earth, fire, water. The gentle sounds of water trickling from the fountains and flowing gently along the meandering stream that run through the garden is a therapy in itself enhanced by the calming sounds of the wind in the leaves of the trees which is always present. Fire is represented by three large red spheres strategically place in a recess of one of the paths running in front of the autumn area of the garden. and the earth is represented by the lush growth it provides throughout. In the center is a small flag stoned area with a bench. As you enter this, there are two miniature trees of life and this area is dedicated to Iris’s husband, Reginald, as it was planned that he could sit there and meditate. 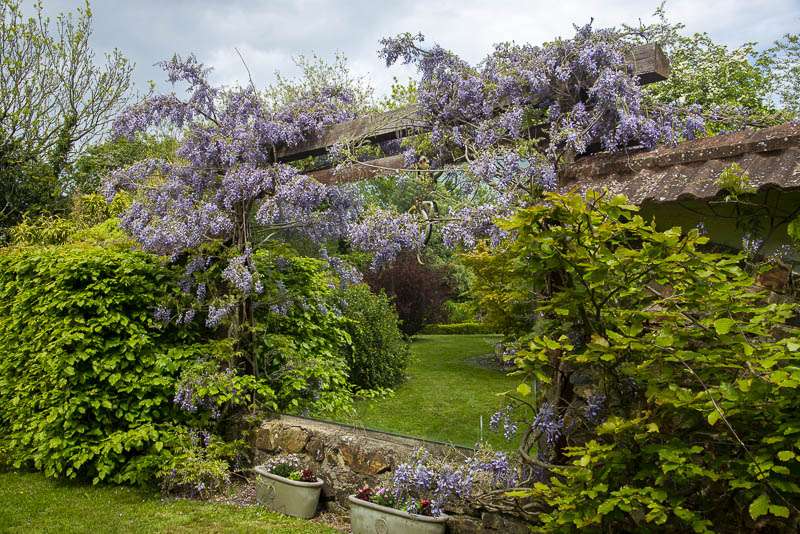 At the very bottom of the garden, somewhat naturally divided from the rest of the garden, is the Japanese Tea Room, a seating area with a table and a pond overlooked by “Buddha” himself. Water lilies, irises, green shrubbery, the fleeting black birds and the shy “coy” (fish) making an occasional appearance add to the ambience of this relaxing area of the garden.

This garden is a tribute to Iris Checkett, a lady oozing with energy and inspiration as she single handedly nurtures this creation of hers and shares it with great affection. 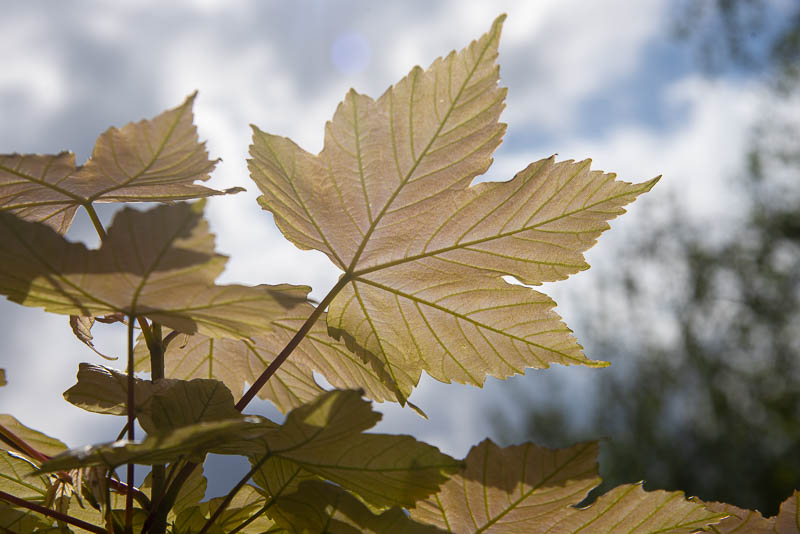 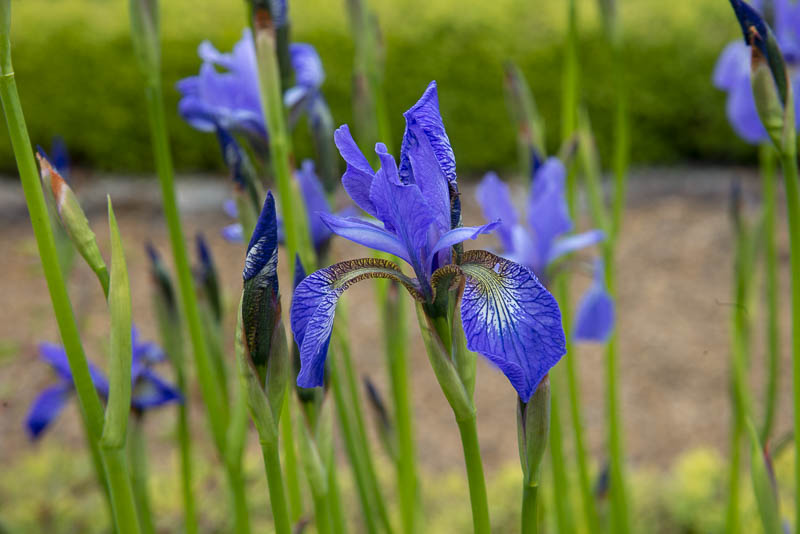 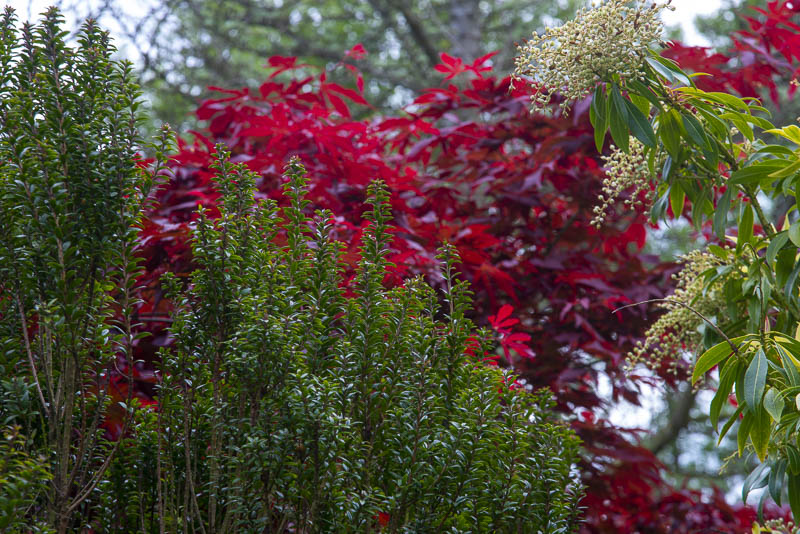 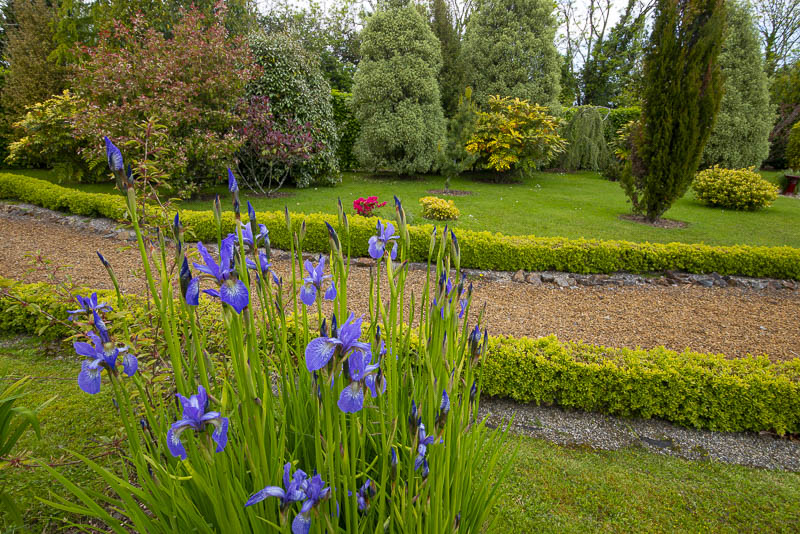 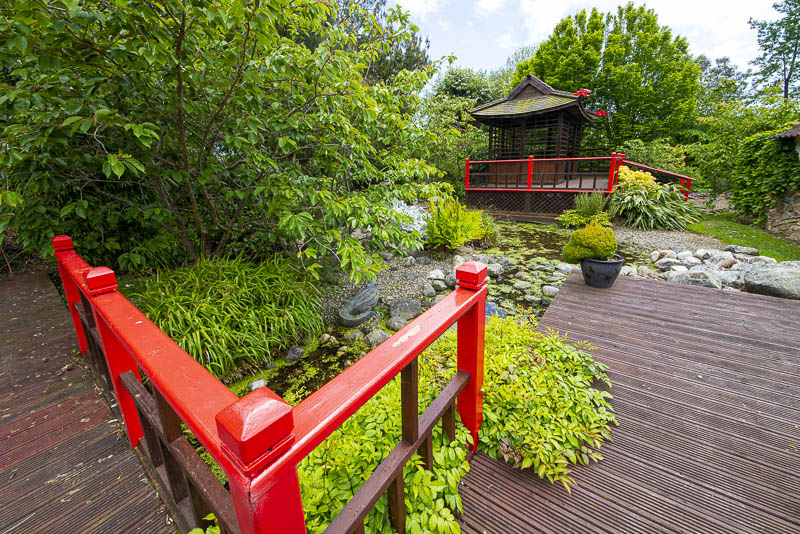 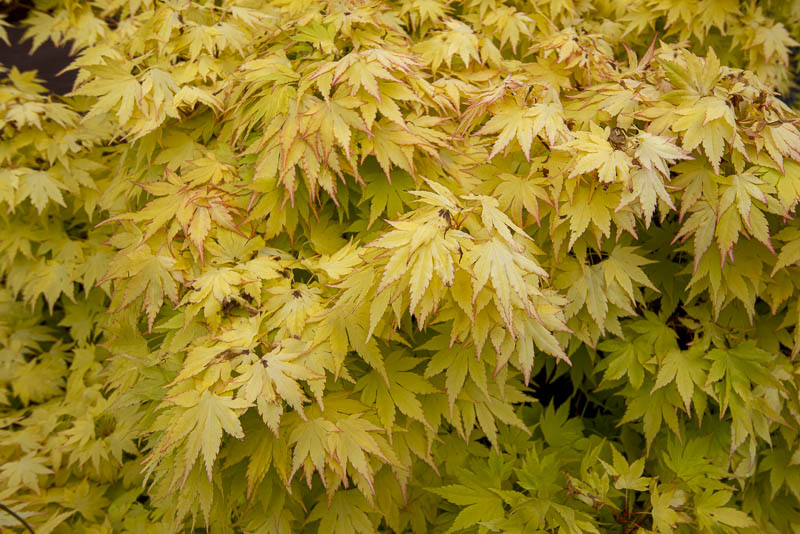 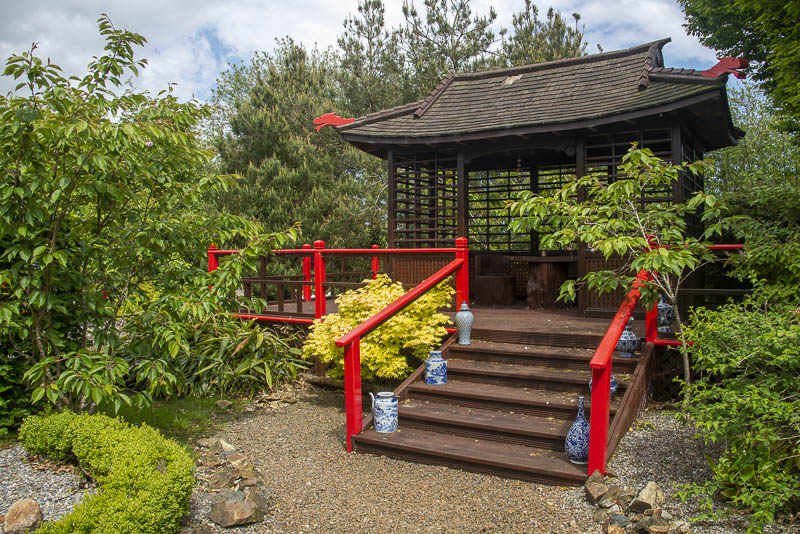 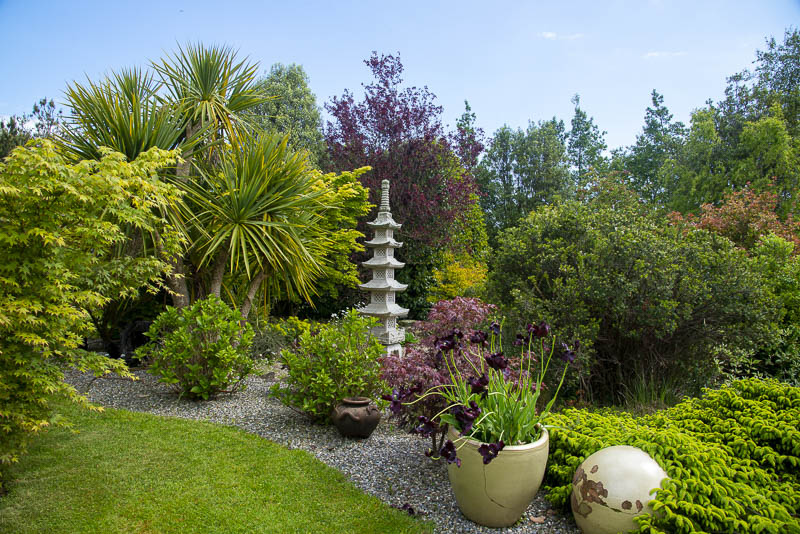 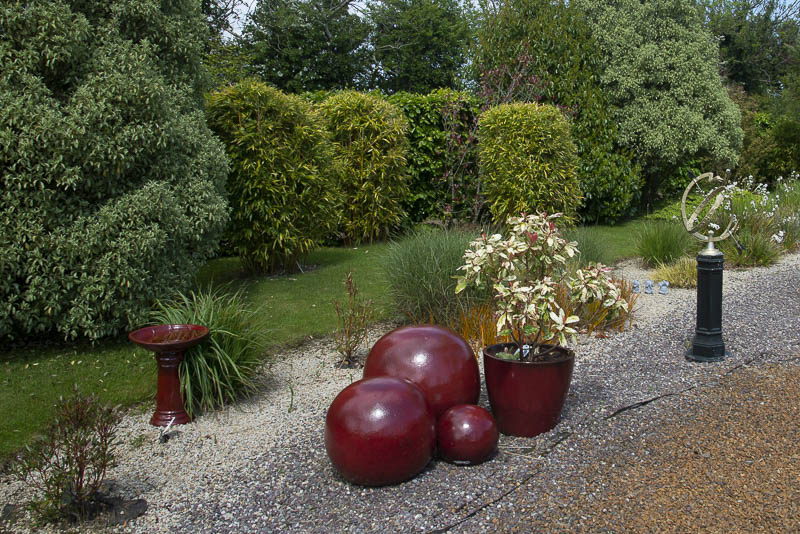 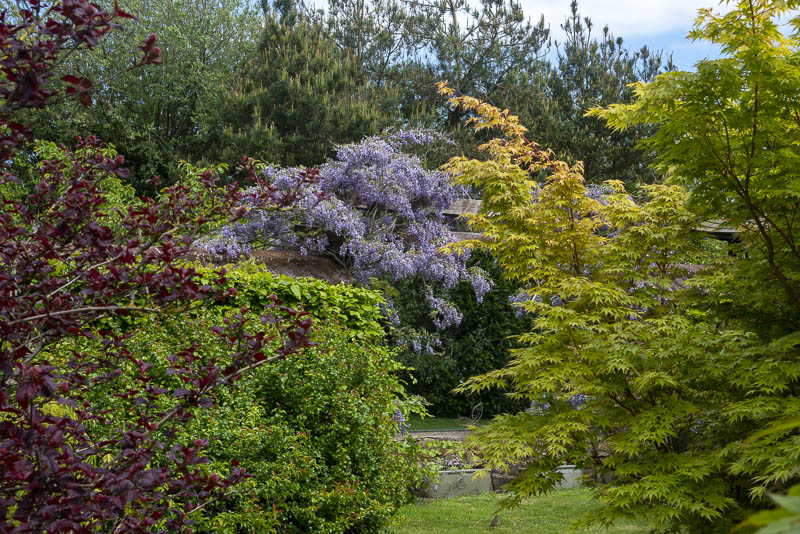 Information
Opening Hours:  Sunday and Friday May to August 2pm – 5pm, or by appointment to individuals and groups.