This silver landscape of barred rock stripped by the high winds and harsh weather, enhanced by the continuing changes of patterns of light piercing through the clouds of graduated grays, blues and yellows and emerald colour of the Atlantic seas produce an ever changing kaleidoscope with a stark beauty and a great sense of peace. 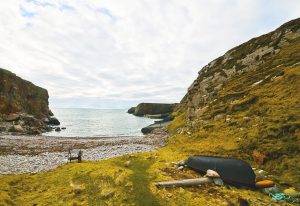 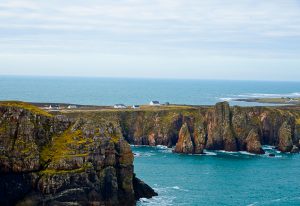 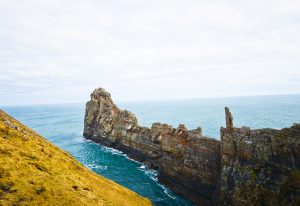 Tory Island is located about 8 miles off the County Donegal coast in North West Ireland. This rocky outcrop lies east – west parallel to the Donegal coastline and measures roughly three miles long by three quarters of a mile wide. Generally flat terrain the island rises to about 300 ft      towards the eastern end where magnificent sheer cliffs drop straight down to the Atlantic Ocean. From the highest cliffs, there are commanding views of the island and in the distance the Derryveagh Mountain range on the Donegal coastline.
The population is approximately 140. These kind but tough inhabitants, toughened by the harsh weather through the winter months, are committed to their island home watching out for one another like one large family.

Access is by ferry from either Bunbeg and Magheroarty harbours , Magheroarty being the shortest distance. I
travelled from Magheroarty, roughly an hours drive from the major town of Lrttetkenny. The boat journey lasted approximately a three quarters of an hour through the long rolling seas of the Atlantic Ocean. As you approach the island, its low profile on the horizon look like the profile of a sleeping giant taking a nap on the oceans surface. The entrance to the harbour is narrow, restricted by the sea defenses constructed to keep the Atlantic Winter storms at bay, but once docked you are in the heart of the middle town.

On this trip, I chose the winter, early February. There is something special about these islands off our north and northwest coast when you visit at this time of year, perhaps a clearer understanding of the strength and determination these people to survive here and their devotion to their island home. Perhaps this time of year could be better described as the deepest ebb in the calendar with a anticipated outlook to the summer months. I will most definitely will be returning later this year in May!

Once on the Island I settled into my B&B accommodation, the home of Eilis and Norman. A wonderful couple. Their home was an open door to all as visitors popped in to check they were ok and for a chat. Now I’m not complaining, but believe me what ever my body lost in keeping warm outside was replaced two fold by the intake of wholesome food dished up for breakfast, lunch and dinner. 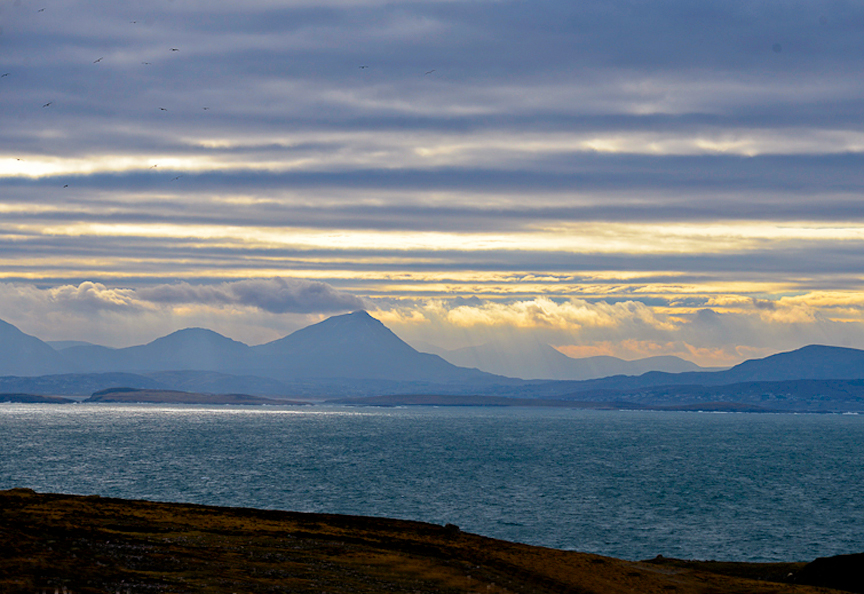 Time to explore. The island being relatively flat, and not very big (3.5 miles x ¾ Mile), afforded the opportunity to explore on foot. Great spot for families to do the same. I was based in the middle town (in the center of the island), so head west brings me to the Lighthouse and to the east, east village and the cliffs.

Walking towards the East Village you become very aware of the silvery terrain created by the exposure of the gravel where the turf had been cut away over the years as a source of firing. As I climbed the gentle slope heading toward the cliffs, the east village appeared. Quite scattered in layout with a mixture of old and new homes. A blue and white shrine to “Oul Lady” overlooked the village and quite pretty against the stark landscape.

On reaching the eastern cliff base, the ragged meandering coastline spread its visual beauty. Compliancy was not the order of the day. These cliffs could be deadly and care must be taken. The landscape sloped gently upward and it was a gentle climb to the top. The sounds of the seas crashing against the cliffs and the swishing sounds as the water rushed in and then receded over the gravely beaches in the coves. The rocus calls of the Ravens broke this melancholy sound as they drifted above the cliffs.  Sea birds, gulls and a hunting Kestrel kept an eye on my every move as I headed to the top of the cliff from where panoramic views lay open the expanse of this little island to me..

The views from here were amazing. You could see the whole island as far as the lighthouse in the far west end. It became apparent how narrow the island was and the extent of these spectacular cliffs that protect the island from the wild Atlantic waves. Middle Town was clear to see and a few scattered white coloured cottages sporadically placed in the stony, barren vista. To the south, the Donegal coastline and the silhouette of the Derryveagh Mountain depicted in shades of blue and gray and lit by some of the most stunning skies made up of grey, whites, yellows and blue.

Ambling back towards middle town, and dinner, passing the shrine of Our Lady on my right, the landscape here is very barren and flat. A red bench all on its own beckons you to sit a while and gaze across the open expanse all the way to the Donegal headland. It’s so quiet and peaceful… your mind has a chance to ramble. Time to stop dreaming and carry on to base and a warm dinner.

Next day I ventured to the west. Through the middle village passing the Tau Cross, the Bell Tower and out into the open space. More grassland here but still very stony and wet. The coastline has a gentle slope to the sea where the foreshore is rocky. The light house is at the very tip on an elevated area, now decommissioned as a manned lighthouse, still provided a warning to mariners the electronic way as well as a lighted beam. It must have been a romantic spot in the old days when manned by Irish Lights. So many of the light keepers were wonderful craftspeople and made amazing items ho help while away the hours whilst on duty. 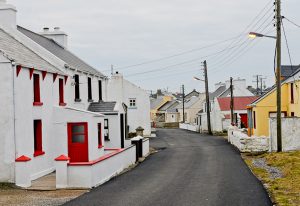 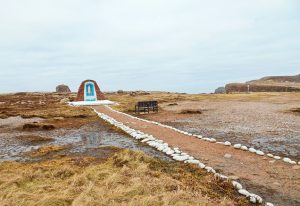 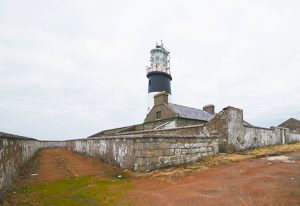